The origins of Social Theatre in Bergamo

The Teatro della Società (Theatre of Society), this was its original name, opened its doors to the public during the Carnival season, in 1809. It was founded in the wake of a competitive rivalry between the Upper and Lower City: it was meant to rival the Riccardi Theatre (the current Donizetti Theatre) to give the Upper City the cultural supremacy that the new Lower-City theatre was challenging.

Built thanks to the support of a large group of nobles from Bergamo, Social Theatre remained active, not always successfully, up to the 1920s.. Then, its fate reflected the decline of the Upper City as the driving force of the social and cultural life of Bergamo. The theatre has now been restored to its original function, thus attesting the new centrality of the Upper City and testifying the full integration of the old town and the small villages at its slopes.

Social Theatre: the project for an Italian-style theatre

Leopoldo Pollack, a student of Piermarini, was appointed to design the new building. Pollack decided to follow an Italian-style configuration with several levels of boxes to enhance sightline, thus meeting the needs of the aristocrats and respecting their hierarchical relationships. As far as the stalls area is concerned, Pollack chose not to follow the typical horseshoe-shape plan and to opt for a more refined and elegant French-style oval-shape plan. The combination with the vertical development of the boxes is perhaps the most original aspect of the project.

Today, Social Theatre is fully operative, offering a rich and interesting programme, from music to prose, passing through more modern events; you can visit the theatre on the days when assembly/disassembly operations and special events are not planned. Booking is compulsory.

The 86 boxes of Social Theatre are distributed over three superimposed levels, on which there is a fourth level called “gallery”. Pollack designed the wooden balustrades of the boxes following a continuous line, as Piermarini did for La Scala theatre (in Milan); it emphasises the horizontal dimension of the levels of boxes (compared to the vertical one, which stands out in the balcony section originating from the Bibiena model), and gives a harmonious classical uniformity to the overall shape of the hall . The wooden balustrades were rich in polychrome decorations, some of them in bright colours, such as the interior walls which were sometimes adorned with fake marbles, and in contrast with the low-quality materials of the floors and lime vaults.

Pollack could only partially adopt the new techniques which were popular in those years. Because of the narrowness of the street, via Corsarola, he could not enrich Social Theatre with a monumental facade, a portico, a colonnade, or anything which would have helped people immediately identify the building as a theatre—as it happened with Piermarini’s La Scala. Consequently, he had to be content with an elegant façade which did not ensure any continuity with the neighbouring buildings. Only the decorative elements, pertaining to the world of theatrical arts, made its function as a place for public performances explicit.

Towards the end of 19th century, the difficulties of Social Theatre reflected those of the Upper Town. The sporadic openings only brought a semblance “of past life, which has been pushed away by an unstoppable and strong force”, as the local newspaper claimed in December 1878. Already in the Austrian period, the construction of the Porta Nuova’s propylaea and the strada Ferdinandea but especially the station and its railway connection with Milan (1857), represented the main stages of the Lower City’s emancipation, which was finally gained in 1872 with the transfer of the Town Hall.

The opening of the funicular in 1887 strongly improved the relations between the two parts of the city, but the fate of Social Theatre inevitably worsened. A significant indicator of this decline was the minor role that Social Theatre played on the occasion of Donizetti celebrations in 1897, during which the Riccardi Theatre and the Lower City had a leading role. Around 1900 and in the first decade of the century, the main stage hall –which underwent major restoration works in 1902, visible in the 1903 season, and then in 1907, visible in 1908—welcomed new genres such as the operetta (1898, from 1908), or even performances of modern technology such as the gramophone (1898) and the cinema (from 1908). These novelties could be interpreted as signs of open-mindedness, but in that increasingly difficult context they were simply expedient measures taken to offer a less demanding programme. Despite that, the theatre had some successful seasons: in 1915, and then more frequently in the early 1920s (1921, 1922, and 1924). However, the fact that a new era of prosperity had begun for Social Theatre was just an illusion.

Music resounded within the theatre’s walls until 1929 and the last shows date back to 1932. The following years are only characterised by demolition projects, adventurous attempts at changing the theatre’s function, and continuous property transfers. The situation worsened to the point that the Municipality of Bergamo acquired the theatre in 1974 and from 1978 to 1981 extraordinary maintenance works were carried out and safety measures implemented. From then on, the theatre mainly hosted art exhibitions and expositions, until the beginning of the restoration works planned jointly in 2006 by the Municipality and the Superintendent. 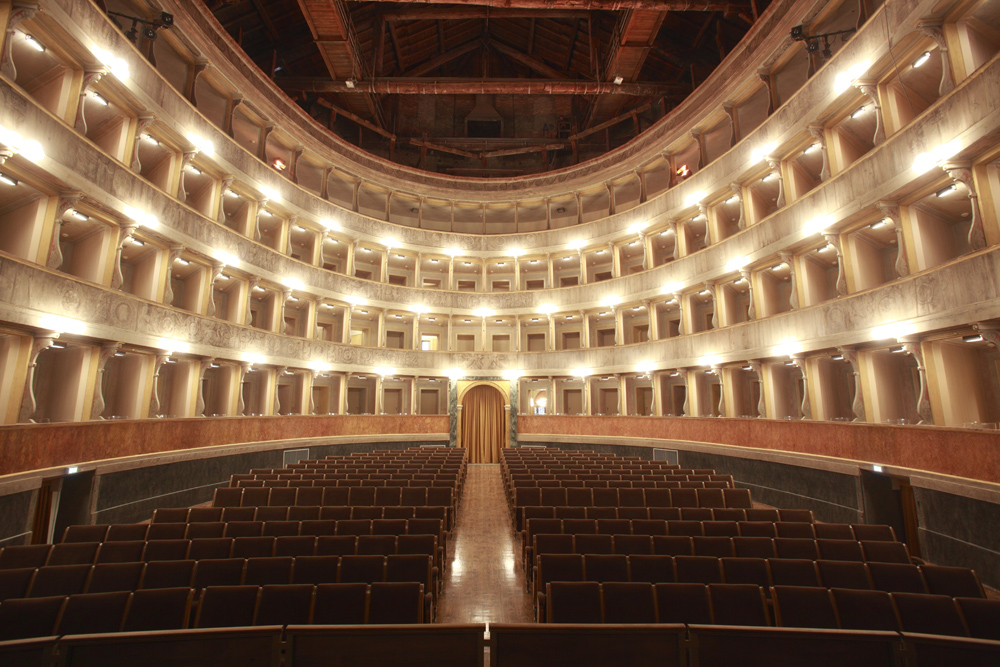 The restoration works finished in May 2009 and have resulted in a completely renewed historic theatre: from the foyer’s flooring, the walls, the ceilings, to the finishings and the new main entrance. Moderate supplementary adjustments were also made to the wooden balustrades of the boxes with cabinetwork, fixing and protection of the decorations and balusters

The first three levels of boxes (for a total of around 550 seats) and the floorings were restored. Furthermore the Theatre saw the insertion of a steel structure to reinforce the existing one in wood, the building of new boxes by erecting new partitions according to the original project, the reinforcement of the balustrades, the wood and art work restoration of the pillars and false ceilings, the implementation of new heating, cooling, and fire systems, and the renovation of the electrical and lighting system, as well as the provision of adequate toilets.

As far as the fourth level is concerned, that is the gallery, a static consolidation was planned to make it easily accessible to the audience through simple completion operations. The fact that the Theatre was returning to its original vocation also implied the construction of a new stage and timber frame, while the orchestral pit was equipped with a mechanical platform which can be raised to three different levels. Finally, three new levels of fitting rooms were added to the right of the stage. 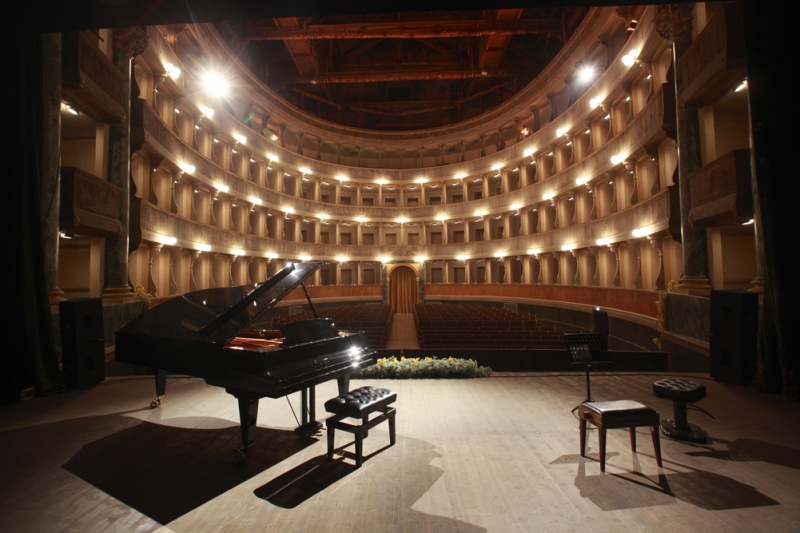 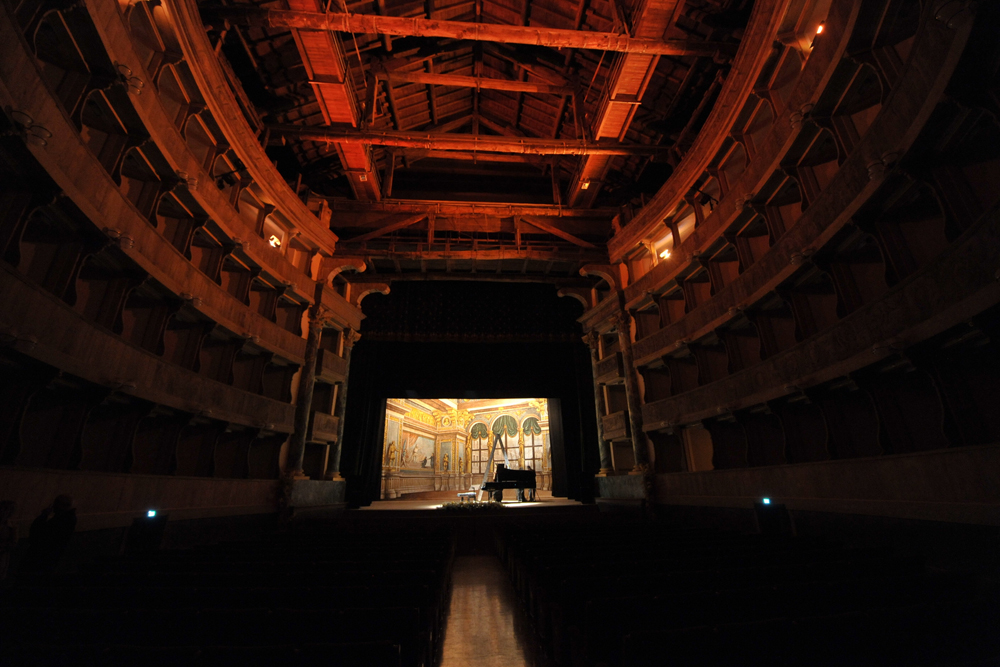 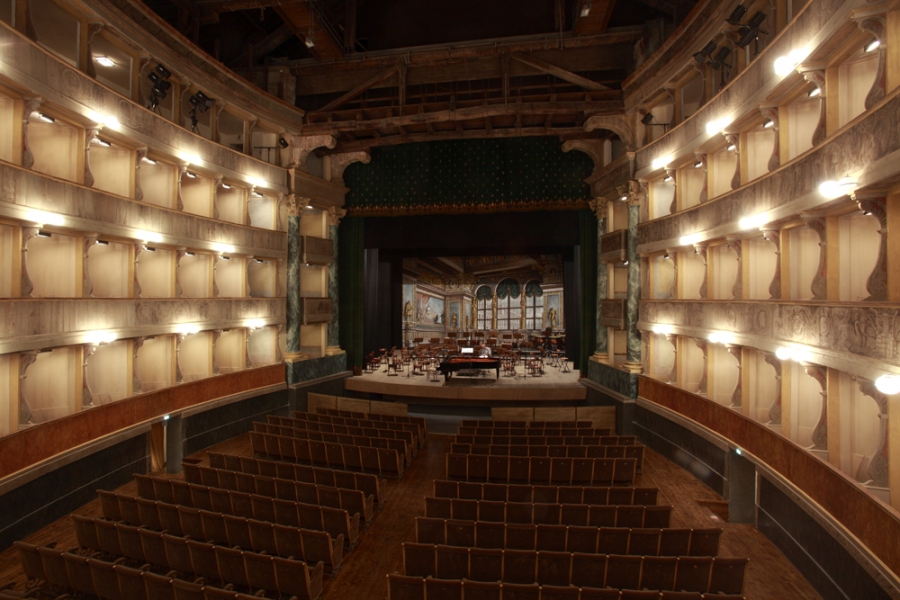 How to reach us
Plan your event
Visit the Theatre