Theater in the Risorgimento

Theater in the Risorgimento

Impatience with Austrian rule was growing; among the provinces of Upper Italy, Bergamo was the most determined to speak out against the Empire. The actual revolt broke out in March 1848. For reasons of political turmoil and then due to a cholera epidemic, the Riccardi was closed during the 1848 and 1849 Fair seasons, and for a certain period was used as a military hospital. In the meantime, the illusions of freedom fell one by one; and after a victorious campaign, the patriotic forces disintegrated, and the Austrians regained the upper hand.

Years without history followed, except for the fire that destroyed part of the stage one night in 1850, and the improvements made in 1856 Then, finally, in 1859 Bergamo was freed once and for all from foreign rule. On 12th August of that year, a concert was held at the Riccardi for the arrival of King Vittorio Emanuele II in Bergamo. There was a new atmosphere about the city, a feeling of progress and well-being, as well as that of rediscovered freedom. Gas lighting arrived at the theatre in 1868, replacing oil lighting.

In 1869, interior restoration work was carried out. The Theatre hall was enriched with decorations by the painter Francesco Domenghini, an artist of genius and a great expert in painting techniques, who frescoed the ceiling with figures praising the triumph of the art of music, surrounded by allegorical figures and angels in the frame. On the proscenium boxes the artist painted dancing putti and on the three rows of boxes festoons intertwined with ribbons. In the centre of the archway was a clock supported by maidens. Despite this, the period was not very bright for Riccardi, the lack of municipal subsidies caused the level of performances to drop and discouraged the public.

A sign of recovery came when the management of the Theatre was entrusted to an enterprising master builder, Luigi Dolci and, from 1879, to Giovannina Lucca, widow of an important music publisher and direct rival of Ricordi.

In 1895 the theatre passed to an association of citizens. 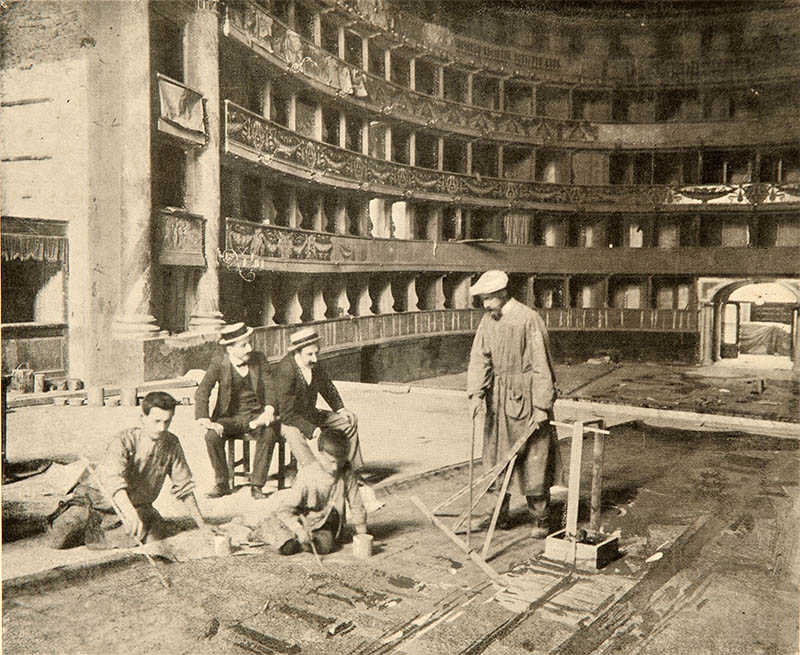